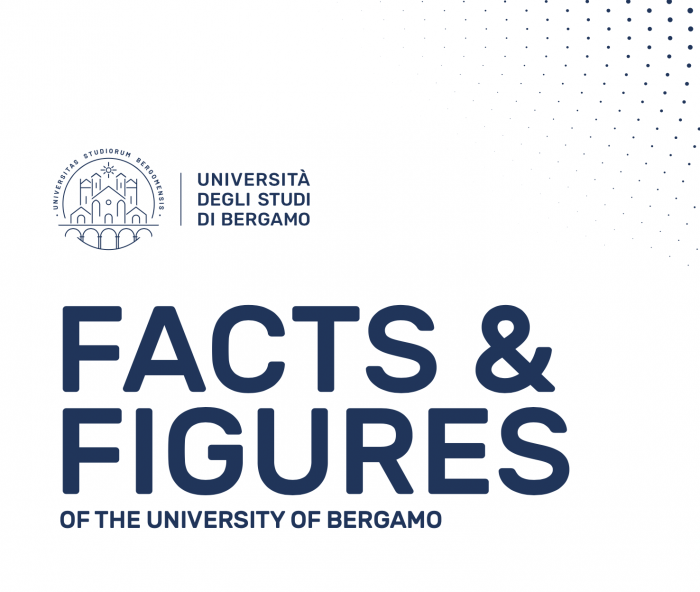 Numbers, data and statistics are essential tools to have an immediate overview of our university, its structures and its people. FACTS&FIGURES of the University of Bergamo (published in Italian as UniBg INCHIARO) is at the same time trail of the road we have gone so far and the direction we are heading to. Our aim is not only to tell our story,

but also to provide evidence of our values through the achievements, the turning points and, after all, the facts and figures that we collected in the last 50 years or so.

We are indeed a young university, born in 1968, and grown during a time of great social and technological revolutions, which remain engraved in our cultural DNA.
Action and responsibility are the two keywords that sum up our mission.

Action is our gaze towards the world. It expresses through our courage to experiment in the field of scientific research and applied sciences, in the construction of international networks of academic exchange, in the cutting-edge programmes we offer our students and scholars. Responsibility is the process we follow. It expresses through the close support we give our students along their educational, professional and personal development. We take pride in educating students who are actively involved in the process of knowledge building. As such they become above all conscious citizens, who are required to stand up to the values learned during their university life.

If FACTS&FIGURES may at a first glance seem just a collection of numbers, I invite you to dig deeper into this publication to discover the value that we are building for this and for future generations.

Browse the Report UniBg FACTS&FIGURES
Tell a story with numbers

The "UniBg FACTS & FIGURES" report is the collection and narration of UniBg's history and growth through data and numbers. More than fifty years have passed since its foundation, the university has grown: seven departments, three campuses, forty-one degree courses.

Since the Libero istituto universitario di Lingue e letterature straniere's foundation in 1968, with its first seat in Piazza Vecchia, new degree courses were born until, in 1992, the institute officially became a University, changing its name to the University of Bergamo, as it is today.

The attractive force of Bergamo and of the University is capable of attracting teachers and students from Europe and the world. We're a young university, but strongly connected to the territory, with dozens of collaborations with companies and local institutions.

Neither too large nor too small, the University of Bergamo is a dynamic and proactive reality which ensures that educational offer and responsiveness that are required by the territory.

As mid-sized university in a mid-sized city, the University is small enough to give students more individual attention, both in education and services, and big enough to ensure all the options a student can seek.

The University of Bergamo is committed to create the best opportunities for the development of research and knowledge, which translates in an increased effort to spread knowledge and build relationships with other universities in Italy and abroad.

PhDs and Research Centres guarantee scholars excellent study and working conditions for the development of projects in various sectors, while international agreements allow researchers, temporary research fellows and professors to participate in profitable exchanges and help students to benefit from unique experiences.

Every year, Italian and international students choose the University of Bergamo for the attention it pays to them, for the excellence of its research and teaching, and for its ability to establish profitable relationships throughout the territory.

In the past six years the number of students enrolled at UniBg has increased by over 50%, indicating an important growth of the University. Foreign students also grew by 74.5%.