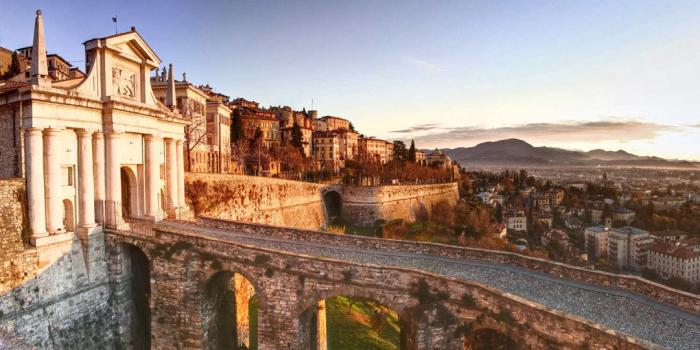 A city pending between local traditions and global movements, acknowledged by international press and by the tourists who visit it every day as one of the most enchanting and interesting towns in Lombardy.
Divided between the medieval Upper City, one of the few historical centers in Italy to still be surrounded by its ancient wall system, the venetian walls, and the modern Lower City, the heart of business activities, Bergamo is rich in culture and leisure activities.
A perfect sized city for students, to be completely discovered:

How to reach Bergamo

Many national and international flights land directly in Bergamo Orio al Serio airport, which is close to the city; city bus line n. 1 allows one single ride for direct Bergamo - Airport connections plus the use of all ATB lines within the city area, including cable railway, within 90 minutes from ticket validation (rides every 30 minutes; € 2,40). For info: Azienda Trasporti Bergamo (tel. 035 236026). Alternatively, a taxi ride from the airport to the city costs around € 20-25.

There are various means of transport to reach Bergamo from Milan Malpensa airport:

A complete map of ATB connections can be found at this link.

A4 Torino – Venezia motorway: Bergamo or Dalmine exits. You can find maps, (car or pedestrian) paths, virtual tours, on websites such as Google Maps, TuttoCittà, ViaMichelin.

From Milan (Garibaldi bus station) you can take a Società Autostradale bus to Bergamo, leaving every 30 minutes.

Bergamo is easily reached by train. There are direct trains leaving every hour from Milan - Centrale / Lambrate / Porta Garibaldi Stations. The journey lasts about an hour. For more detailed information about timetables and services please refer to Trenord and Trenitalia websites.

A ticket (city fare) costs € 1,30 and lasts 75 minutes from validation. A € 7,00 tourist ticket (Ticket Airport Bus) is also available, which allows single and return rides from Bergamo to the Airport, within 72h from validation plus the use of all ATB city area lines, including cable railway (the fare includes luggage transportation).
Tickets must be purchased, before getting on the bus, in station, airport or city newsagents. Further information can be found on Azienda Trasporti Bergamo website.
Furthermore, an agreement with ATB allows intensified public transport service of specific linees towards the university premises in Bergamo, via dei Caniana and Dalmine (UniBG Shuttle).